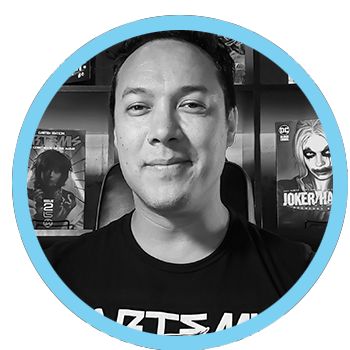 Jason Badower is the artist of JOKER/HARLEY: CRIMINAL SANITY for DC Comics Black Label and co-writer of LINDSEY STIRLING’S ARTEMIS.

Australian born, and now based in the US, Jason is an artist and writer who has worked on over two dozen movies such as WONDER WOMAN 84,  SHAZAM, SPIDER-MAN: FAR FROM HOME & HOMECOMING, THE HUNGER GAMES: CATCHING FIRE, JUSTICE LEAGUE, LOGAN & THE MARTIAN. Jason has drawn for even more tv shows including GAME OF THRONES, THE WALKING DEAD, HEROES, TRUE BLOOD, CASTLE and POWERLESS. His covers for DC Comics include both comic books and blu-rays: BATMAN, THE FLASH, ARROW, SUPERGIRL, PLASTIC MAN, CAPTAIN ATOM and KRYPTON. Jason wrote a WONDER WOMAN story that featured her officiating a gay wedding that was covered in EW, MTV and the HUFFINGTON POST.